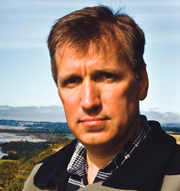 A veterinarian-turned-author of bestselling thrillers is making his only Iowa stop this weekend on a national tour to promote his latest book.

“Bloodline” is the eighth book in James Rollins’ popular series of Sigma Force novels, following a fictional elite fighting unit that’s the black-ops arm of the U.S. Department of Defense.

“In this new adventure, the president’s daughter is kidnapped off of a yacht in the Indian Ocean,” Rollins says. “It’s a covert military team lead by the sharp nose of a military working dog that has to hunt through the jungles of Africa, where she was taken. What they discover is that the target of the abduction really wasn’t this woman, it was her unborn child and that this baby potentially holds the key to immortality.”

A few years ago, Rollins and several other authors did a speaking tour of U.S. military bases in Iraq and Kuwait. “Being a veterinarian, I sort of gravitated towards the dogs I was seeing, the working dogs,” Rollins says.

“I got to talk to a few of the handlers. I was curious what that relationship was like. Do they treat their dogs just as military hardware? Do they just treat their dogs as a sidearm? I found that was actually far from the truth. There’s an intimate bond that develops between handler and dog.”

The 50-year-old Chicago native does not come from a military background. Rollins grew up in the St. Louis area and got his undergrad and graduate degrees at the University of Missouri at Columbia. He says his experiences with meeting Americans in uniform who were serving overseas changed his perceptions about how canines are utilized in war zones.

“One guy actually told me, ‘I think my dog understands me better than my wife does,'” Rollins says. “That level of intimacy where they’re sleeping together, eating together, training together, I wanted to try to capture that in print. Again, as a veterinarian, I even wrote scenes from the dog’s perspective, scenes to try and take my reader and put them in the paws of that dog and experience what it’s like to be a war dog.”

While the new book has only been out a matter of days, Rollins says he’s already gotten more fan mail for the dog, Kane, than any other character he’s created. Rollins now lives near Sacramento, California, and established a veterinary clinic there. While he’s earned global fame from his writing — his books have been translated for readers in 32 countries outside the U.S. — Rollins says he’ll never fully give up his veterinary practice.

“I still do some volunteer work,” Rollins says. “I work with a group that traps feral cats up in northern California. They bring them to the shelter. One Sunday a month, I spend eight hours spaying and neutering them. As I describe it, all I do with my veterinary degree now is remove genitalia, but it’s a hobby.”

Rollins is appearing in Cedar Rapids at 1 P.M. Sunday at The Hotel at Kirkwood. He’ll give a talk on his transition from veterinarian to author, how he developed his writing style and some background on “Bloodline,” along with taking questions and signing copies of the book.