You are here: Home / Business / ISU president says he has a plan for economic development 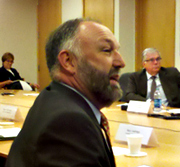 The new president of Iowa State University is promising the school will do more to help the state attract new businesses and create jobs.

Steven Leath addressed a meeting of the Iowa Partnership for Economic Progress (I-PEP) Board on Tuesday.

He said I.S.U. needs a streamlined strategy in terms of helping boost the state’s economy. Leath expects to reveal those plans at his installation ceremony in September.

“We are going to have an overhaul of how we do economic development at the university,” Leath said. “We’ve been working on this for quite a while, so you’ll see a number of priorities and public-private partnerships by (September).”

Governor Branstad and other members of the I-PEP Board listened as Leath described some of the economic development strategies in North Carolina. Leath, who served as vice president for research at the University of North Carolina prior to his arrival in Ames, said one of the more successful projects involved the creation of a Research Triangle Park.

“The idea behind this was to take the research power of three universities — UNC-Chapel Hill, North Carolina State and Duke — and create an area in between that really fostered public-private partnerships…a very collaborative attitude is really what was driving this process. I think that’s one place that Iowa and North Carolina really have in common,” Leath said.

The Research Triangle Park helped create 40,000 high-paying jobs in North Carolina, according to Leath. He indicated a “hiring spree” is coming to I.S.U., as the university needs more researchers to further Iowa’s growing biotech industry.

“We’re going to hire at least 200 more faculty in the next 18 months and probably push 300 in the next two-and-a-half years,” Leath said.