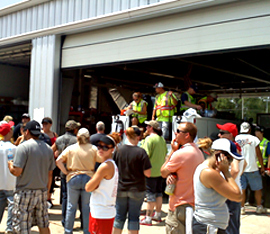 Volunteers get instructions before searching for missing Evansdale girls.

The girls, who are cousins, were last seen riding their bikes in downtown Evansdale, which is just east of Waterloo. Rick Abben, a chief deputy with the Black Hawk County Sheriff’s Office, says over 1000 people volunteered Saturday and today over 600 showed up for the search effort.

“It makes you feel good that people are willing to help out and they want to help law enforcement because, you know, everybody pretty much has kids and so everyone is really concerned about it,” Abben says, “and we really appreciate their assistance.”

The girls’ bicycles were found, abandoned, near a lake a couple of hours after the girls went missing. Divers searched the lake and by Sunday afternoon crews dragging through the bottom of the lake were about 80 percent done with that task.

“We really have no indication what happened other than we have two bicycles sitting down at a lake,” Abben says.

Boats and search parties were combing a nearby stretch of the Cedar River for clues. There’s been an ongoing aerial search of the area, too.

“The search has been expanded and now takes up probably about a five-mile-square area,” Abben says. “People on the ground along with dogs and then we also have law enforcement doing house-to-house (searches), making contact with people.”

Earlier today, cops and deputies tracked down sex offenders in the area to check their whereabouts on Friday. “Just to rule that out,” the deputy sheriff says.

On Monday authorities plan to release the extent of a reward that will be offered to anyone who may have information that would lead authorities to find the girls. When 10-year-old Lyric Cook-Morrissey of Waterloo and her cousin, eight-year-old Elizabeth Collins of Evansdale, did not return from their midday bike ride in Evansdale, the family began searching for the girls at two o’clock on Friday afternoon. A volunteer fire fighter found the girls’ bicycles about two hours later, along with a cell phone and a bag the younger girl had been carrying, but authorities say that’s the last trace they have of the girls.