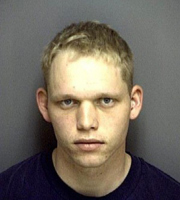 An eastern Nebraska man is now jailed on charges he lured at least three boys to Council Bluffs, Iowa, and molested them — perhaps hundreds of times over several years. Twenty-two counts of sexual child abuse are filed against 32-year-old Robert Schuster, who lives near Lincoln.

Lancaster County Nebraska Sheriff Terry Wagner says Schuster befriended the parents of his victims to place himself in a position to be alone with their children. “He was taking younger children from here to Iowa to some kind of event and then spending the night with the children in the Council Bluffs area,” Sheriff Wagner says.

“That’s sort of how that whole thing developed.” Court documents indicate Schuster lured children from the Lincoln area to Council Bluffs between 2002 and 2009. The boys ranged in age from seven to 16.

Authorities say more boys may have been victims and they’re urged to come forward. Wagner says Schuster perfected his routine to obtain access to the boys.

The investigation was launched after an unnamed 19-year-old told Lincoln authorities Schuster started sexually assaulting him in 2005. The suspect is known as Robby and changed his last name from Mulder to Schuster in 2005.

Schuster was arrested in Council Bluffs and is in the Pottawattamie County Jail on $50,000 bond.