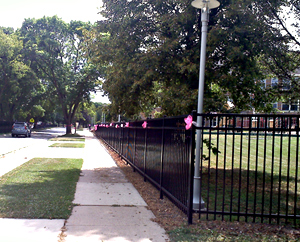 Pink ribbons line the fence outside Kingsley Elementary School in Waterloo, where Lyric Cook-Morrissey is scheduled to start classes in August.

The aunt of two missing northeast Iowa girls says an attorney has advised the parents of the older girl to stop talking with the police and the media about the case.

Tammy Brousseau, the aunt of 10-year-old Lyric Cook-Morrissey, told KCRG Television the girl’s parents had retreated to a hotel Wednesday night to get some rest when an investigator approached.

“The FBI showed up at the door, beating on the door and wanted to interrogate them again, saying: ‘How can you sleep right now?'” Brousseau said.

According to the aunt of the missing girls, an attorney also told Misty and Dan Morrissey not to take any more polygraph tests. Misty Morrissey was released from a federal prison in May after serving time for drug-related offenses.

Dan Morrissey has burglary and drug-possession convictions in his past. The couple has separated and there’s been a restraining order in place that had prevented the two from coming into contact with one another.

Misty Morrissey’s sister told reporters on Thursday that investigators had confronted Dan Morrissey Wednesday evening, telling him they had proof he was responsible.

“They said, ‘We have evidence,'” Morrissey said. “Well, we all know that if that was the truth, they’d already have Dan locked up.” Lyric Cook-Morrissey and her eight-year-old cousin, Elizabeth Collins, disappeared from Evansdale on July 13.

A chief deputy in the Black Hawk County Sheriff’s office told reporters late Thursday that law enforcement agencies did background checks on the families on Friday, shortly after the girls disappeared, and so cops knew “immediately” about the criminal histories of Lyric’s parents.

The deputy said it was “a distraction” to have the couple choose not to cooperate “100 percent” with investigators.