You are here: Home / Agriculture / Farm help group adding Iowa to its list of states

A nonprofit group that has helped farmers in need in four other states is now expanding to Iowa.

Founder Bill Gross is a cargo pilot who flies all over the world, but he grew up on a family farm in North Dakota.

“There (are) times in all of our lives that we need help and should ask for assistance, and when you realize that, there are plenty of people (who) wish to help,” Gross says. “We have hundred of volunteers, the organization has sponsors. We are here in Iowa and wish to help farm families. There is not same in applying to Farm Rescue, that is our mission, that is what we want to do.” 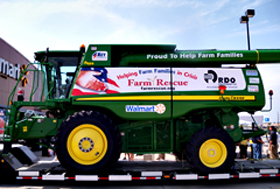 Gross says farmers have a long tradition of helping each other, but sometimes its tough to do, and he says this organization can supply that help.

“It takes the burden off the farm family and also off the neighbors so they can concentrate on getting their own crop in. If anyone knows of a farm family that needs assistance, we get plenty of referrals. You can do that anonymously, or a farm family can call in and apply themselves also,” Gross says.

Farm Rescue began six years ago and has been serving farmers in North Dakota, South Dakota, Minnesota and Montana. Gross says they decided to move into Iowa at the prodding of a 7th grade class in Forest City.

Gross told the story of how the teacher asked her students to contact some C.N.N. Heroes — which he was because of his work with Farm Rescue –and ask them to talk to the class via Skype.

“I gladly did that, told them all about Farm Rescue and also tried to encourage them with my experience in life on how to help other people, how to be successful, how to work hard, to be passionate about what you do in life, and don’t forget to help other people along the way,” Gross explains.

The students in Mallory Lovik’s class followed up Gross’ Skype meeting with letters asking him to bring Farm Rescue to Iowa, and they convinced him to do so. Gross announced the expansion to Iowa today along with several of the sponsors who donate money and equipment.

You can go to www.farmrescue.org to apply or call 701-252-2017. Farm families that need help simply need to fill out a two-page application and answer a few questions.

“They do submit not all their medical records — but if it is an illness or injury — the pertinent ones so we have proof of that,” Gross explains. “They do submit some finances, we’re not out to help multi-billionaire farmers, just small to medium farmers. And we often do a site visit also where we have a board member go and visit the site to see if everything looks in order. So we do screen the farmers and everything is kept confidential.” 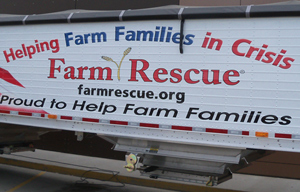 Iowa Agriculture Secretary Bill Northey says there are many ag operations in the state that would fit the guidelines of the organization.

He says getting some help in a time of crisis could be a big benefit to many Iowa farmers. “If we’re talking you know that thousand acres or less, the operations that are single person, or maybe two brothers, or a father and a son, or something like that, we’re still talking tens of thousands of farms across Iowa that really don’t have a lot of options if one of their main people is down with an accident or illness or something,” according to Northey.

Farm Rescue is sending a combine with information on its side and logos from its sponsors on a tour to various cities in the state to publicize the organization’s move into Iowa. The combine will be on display at the Walmarts in Spencer, Mason City, Cedar Falls, Indianola and Ankeny in the next several weeks leading up to the fall harvest.