You are here: Home / News / Campaigns stick to economic messages 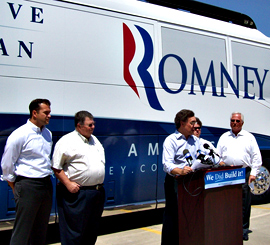 A series of events staged in five different Iowa cities today stressed the warring economic messages from the presidential campaigns.

Mitt Romney’s campaign had supporters speak to reporters in Cedar Rapids, Davenport and Des Moines to denounce one of President Obama’s recent statements.

Al Koch of Henning Construction is chairman of the Master Builders of Iowa stood in front of a Romney campaign bus parked in an Urbandale parking lot.

“I take absolute umbrage with comments and the reference by the president of the United States that as small business owners, we did not build our businesses,” Koch said. “I will tell you that we built our businesses. We missed family birthdays. We missed our anniversaries.”

Romney supporter Dave Greenspon started his business in 1983 and it now has four locations in the Des Moines area.

“What you give up is more than just anniversaries, parties and things of that sort. You give up your life,” Greenspon said. “…I don’t ever regret that, but I think it really was a little damning the other day when I heard President Obama say that this business was built by somebody else other than myself and my employees.”

During a speech in mid-July, Obama argued successful people “didn’t get there on (their) own. The president said “a great teacher”, the “unbelievable American system” and government investment in “roads and bridges” helped “build” businesses. Dan Moulton runs a family-owned business that will build about 140 homes in central Iowa this year.

“It was curious what the president said,” Moulton said. “We actually build our streets, pay for them, put all the improvements in and then give them to our city government.”

Moulton also denounced what he considers a go-deeper-into-debt “philosophy” being pursued by the Obama administration.

Meanwhile, in Sioux City, Obama’s campaign arranged a news conference today that featured a Republican businessman who takes issue with Romney’s opposition to a tax break for the wind energy industry. Rob Hach runs a business in Alta that installs and maintains wind towers.

Romney’s campaign website talks of the “failure of windmills” to make a profit and suggests it’s a waste of “both time and money” to invest in wind and solar technology “projects that do not bring us dividends.”

Hach and his wife started their company in 2002 and earlier this month it had 31 employees.

“On Friday we lost two employees. We have no intention to replace them right now,” Hach said. “There’s just not the demand there and we need to be able to have that tax credit in order to create the certainty in order to continue to grow our company.”

Hach told reporters a politician’s stand on the wind production tax credit is key in his decision-making.

Steve King and the rest of Iowa’s congressional delegation support extending the tax break for the wind industry. Also today the Obama Administration dispatched an official from the U.S. Department of Energy to underscore the recent downturn in orders at businesses in the wind industry. He visited a business in Des Moines that provides parts to wind turbine makers and he went to a business in West Branch that assembles the turbines.

On Thursday, Republican Governors Bobby Jindal of Louisiana and Bob McDonnell of Virginia are due in Iowa to campaign for Romney.