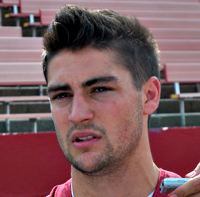 Senior Steel Jantz and sophomore Jared Barnett are back in a battle for the starting quarterback job this fall after both started games last season.

Jantz won the nod for the number one spot last season and started seven games. He was named the Big 12 Offensive Player of the week in the Cyclones overtime win against Iowa.

But he battled injuries and lost the starting job to Barnett. Jantz says he’s back healthy and ready to go this fall. “It’s been a great summer, physically I’ve never felt this good,” Jantz says.

“I’m excited to see how that translates into camp, I’m just running around out there and so I feel great. It’s been a great summer, the coaches will attest to it, it’s probably the best summer they’ve had in me too.”

The junior college transfer tried to play through the injuries last season, and says he’s not sure how being healthy will help his game.

“We’ll see how much better I am I guess,” he said with a laugh. “But I do fell a lot more comfortable. Last year at this time there was a lot of anticipation and I didn’t know how it was going to go. This year I’m comfortable with the offense and ready to get out there again.”

Jantz took over for Barnett in the Cyclones’ bowl game and that set up the battle for the starting spot this fall. Jantz doesn’t think it is easier to know you are the starter going into camp compared to fighting for the spot.

“Whether you are the starter, you’re still always competing whether its another quarterback or another team. So whoever ends up starting, you are still getting ready for next team and all the other quarterbacks you’ve got to play. So, it never really gets easier,” according to Jantz. He says whoever wins the starting job has to execute.

“It’s the same thing that all quarterbacks need to do, it starts from the simple things, the fundamentals and just making smart decisions. It’s not like its any different for me or him, you’ve got to be sound,” Jantz said.

Barnett started six games last year, including the upset win over Oklahoma State. He agrees that you never have your spot secured.

“I feel it’s always a competition, I mean even during the season it was competition, like in the bowl game, that was perfect example,” Barnett said. “I think it’s really good or me and Steel to have this competition again. I feel like its going to make the both of us better by the end of the camp.”

Barnett said both have been working with their new offensive coordinator to become better in the passing game. “The main thing that he has focused on during the spring was getting into our drop quicker so we could read the defense faster. And I think that’s a huge thing, it leads to more accurate passes and better reads in the spring,” Barnett explains.

Barnett knows he has several other things he needs to improve on. “A lot of film watching has showed me that I’m not anywhere near where I want to be. I think I made some good plays this past year, but I also left a lot of plays on the field. A lot of things that could have potentially been touchdowns and extra points on the board,” Barnett said.

Cyclone Coach Paul Rhoads says he likely won’t make a decision on a started until their scrimmage on August 18th. Iowa State opens the season September 1st at home against Tulsa.