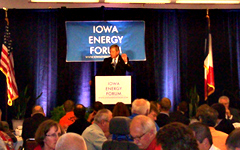 Congressman Tom Latham says he has talked privately with fellow Republican Mitt Romney about a key tax break for the wind industry, but Latham says Romney is standing by his opposition to extending the wind production tax credit.

“I mean, he understands it. You know, his point,” Latham told reporters early this afternoon, pausing before adding: “I’ll let (Romney) explain his point, I guess. I just think that, you know, the industry understands that this is not going to go on forever, that they’re in favor of a phase-out over time and that’s, I think, what we need to be looking at.”

In late July, Latham said he was “disappointed” his party’s presidential candidate was opposed to extending the tax break for what Romney refers to as “windmills.” At the time, Latham called on Romney to “re-evaluate” his stand. Today, Latham seems to be giving up on the prospect of changing Romney’s mind on this issue.

“We’re not going to agree on everything,” Latham told reporters.

Early this morning, during a speech in Des Moines, Romney said America should take advantage of all its “extraordinary energy resources” — including wind — but Romney did not mention his opposition to the wind production tax credit.