You are here: Home / Sports / Brian Ferentz says Hawkeyes are not far away from winning level of past 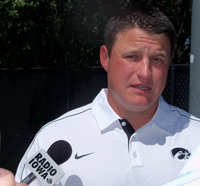 After playing for his dad and the Hawkeyes, Brian Ferentz has returned to Iowa City this year to coach the Hawkeye offensive line.

The younger Ferentz is one of several changes in the coaching staff after two 7-4 regular seasons. But Brian Ferentz doesn’t see the changes as the program taking a new direction.

Ferentz was asked if there was anything he saw that could be changed as he joined the coaching staff. “This is a continuation of whatever has gone on. I played here I cut my teeth here, I learned here. This is how I learned how to operate. I think what we’re trying to do is just do what we’ve done here and find a little bit better way to do it maybe,” according to Ferentz.

“You know the landscape has changed, the league looks a little different now. And probably it’s just part of natural growth, the same way we’re building new facilities and anything like that.” Ferentz was asked if he had any specific ideas for improving the offense when he interviewed for his job. He says new offensive coordinator Greg Davis can handle it.

He says this is Davis’ 39th training camp and he knows what to do and everyone has ideas that they present to him and Davis considers those things. “At the end of the day coach Davis is in charge and coach Davis is gonna go ahead and he is going to get us on the right track and we’re gonna walk out of there,” Ferentz says. “Specific things that we need to do, I just think we need to improve every day we’re out here and do the best we can to maximize what we are. That may have some different looks at times than it has in the past, I’m not sure.”

The changes in the coaching staff impacts recruiting, but Ferentz says the idea behind what they are doing is the same. “Which is go find guys who fit here. Guys who are Iowa football players. And that may take a different form at times, but we’re not looking for the most talented guys all the time, we’re looking for the right guys, I think that’s number one,” Ferentz says.

He says things have changed as far as social media and how it is used in recruiting and Ferentz says they may be ramping that up a little more. “We’re just trying to do the best we can to find any avenue to connect with the guys we’re looking at.” There are two other members of the Ferentz family involved with the team. James is a senior who is the number one center on offense and Steve Ferentz is a freshman who plays tight end.