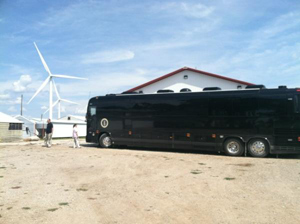 “He said that new sources of energy, like wind, are imaginary. His running mate calls them a fad,” Obama said.

“During a speech a few months ago Governor Romney even explained his energy policy this way, I’m quoting here: ‘You can’t drive a car with a windmill on it.'”

Obama laughed, then added: “Now, I don’t know if he’s actually tried that. I know he’s had other things on his car.”

That’s a reference to a story Romney once told about Seamus, the family dog that got sick as he rode in a carrier strapped on top of Romney’s station wagon.

Obama suggested there’s a modern-day story of the wind energy industry that Romney has missed. “All he’s got to do is pay attention to what you’ve been doing here in Iowa,” Obama said.

“If he saw what you’ve been doing, he’d see that there are places like Newton where a few years ago the Maytag plant closed down. Jobs dried up. Folks are now back to work manufacturing these enormous new towers and blades for some of the most sophisticated high-tech wind turbines on the planet.”

Romney would let the wind production tax credit expire. He and other Republicans argue federal tax policy should not prop up green energy projects– like “windmills” — that cannot make a profit on their own. Obama told the crowd in Oskaloosa that he is willing to “fight for” the “good jobs” in the wind energy industry.

“If Governor Romney understood what you’ve been doing, he’d know that we used to have to import most of the parts that were used for wind turbines. They’re now being made here in America by American workers in American factories,” Obama said. “That’s not imaginary. That’s real.”

Obama cited recent reports indicating 20 percent of the electricity generated in Iowa comes from wind turbines. And, according to the president, the wind turbines that have been erected in the past three and a half years generate an amount of electricity that’s equivalent to what would be produced by 12 Hoover Dams.

“Governor Romney may have figured out that you can’t drive a car with a windmill on it, but he doesn’t seem to know that America now has enough wind turbines installed to generate enough electricity, from wind, to power nearly 13 million homes with clean energy,” Obama said. “That’s how we leave something better for the next generation. That’s worth fighting for. That’s what’s at stake right now.”

A spokesman for Romney issued a written statement early this afternoon in response. “Mitt Romney is a strong supporter of wind power and appreciates the industry’s extraordinary technological progress and its important contributions to America’s energy supply,” said Shawn McCoy, communications director for Romney’s Iowa campaign.

That sentiment seems at odds with the campaign website, which has said for months that the federal government “should not be in the business of steering investment toward particular politically favored approaches. That is a recipe for both time and money wasted on projects that do not bring us dividends. The failure of windmills and solar plants to become economically viable or make a significant contribution to our energy supply is a prime example.”

Romney remains in favor of ending the wind production tax credit. McCoy today said Romney would “set the industry on a course for success and growth by promoting policies that remove regulatory barriers, support free enterprise and market-based competition, and reward technological innovation.”

After his stop in Oskaloosa, Obama visited a family farm near Haverhill that is part of a cooperative that has 52 wind turbines in a 20,000 acre area.