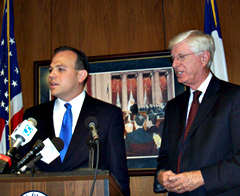 Iowa’s Secretary of State and Attorney General today defended the process being used to remove non-citizens who may’ve voted illegally from the state’s the voter rolls.

Schultz says they checked the 2010 general election and found 1,208 illegal voters and a check of subsequent elections found just over 1,400 illegal voters.

Schultz says he then sought to get access to the federal SAVE program, which provides real-time information on the immigration status of voters.

“Our concern obviously, these are big numbers, but we also recognize that people may’ve gotten a driver’s license or permit and then became citizens after that and the D.O.T. wouldn’t have records of that,” Schultz explains.

“And so, we wanted make sure the we had a responsible, reasonable way in making sure that we could maintain integrity and honesty in our elections as well as protect the rights of voters.” Schultz says other states have taken the federal information from SAVE and purged those voters who came back as illegal, but he says the program he is using is not a purge.

Iowa Attorney General Tom Miller, a Democrat, is defending Schutlz’s office in the lawsuit. “There are two things to balance here, one is voter fraud and the idea that people who aren’t eligible to vote shouldn’t vote. But balanced against not doing thing that can suppress or chill the voting of people who have the eligibility to vote,” Miller explains. “The process is designed to balance those two interests in a very important way.”

Miller says Schultz is handling things in the right way. “What the Secretary outlined is a process that tries to address a fact that he ran into earlier this year that he couldn’t ignore,” Miller says. Secretary Schultz sought emergency rules to be able to remove any voters from the rolls once he receives the federal information.

A Democrat state senator criticized Schultz for not going through the normal legislative rulemaking process, but Schultz says he had to be sure he could take action before the November election if illegal voters were found. “You cannot remove somebody from the voter records under the challenge process 70 days before the election. So August 28th would be the last day that somebody would be able to be removed under this challenge process,” Schultz says.

He says it could take 108 days to go through the normal rules process to create the rules to remove the illegal voters, and he says it can take up to six months. “What’s important here is when someone cast a ballot and it’s challenged, you can’t unring that bell.” Attorney General Miller says everything will be sorted out once they get more information.

Miller says it’s likely those who are found to have voted illegally would not be prosecuted. “These cases would go to the county attorneys, not directly to us. If people were mistaken, if somehow they thought they had the right to vote and voted anyway, with the heavy caseloads the county attorneys have, it is very unlikely they would bring those cases (to court),” Miller says.

Schultz says they are still waiting on federal officials to give them access to the information they need to clear out the voters who are not eligible. He says several other states have requested the information and that has created a backlog.

(Update) The ACLU of Iowa released the following statement from executive director Ben Stone in response to the Secretary of State’s news conference:

“By his own public admission, the Secretary of State does not have time or permission to use federal citizenship (SAVE) records to purge the rolls before the election. This is due in no small part to his decision to wait until weeks before the election to promulgate rules secretly and without public input. His negligent delay cannot serve as justification for his avoiding public scrutiny or for removing voters so close to an election.
“If allowed to take effect, these emergency rules will permit the use of unspecified databases — not just the SAVE database — to purge registered voters from the list using unspecified criteria. The 14 days permitted in the rules to challenge ones removal is laughably insufficient, considering how slow government bureaucracies can move.
“The fact that Iowa Attorney General Tom Miller is fulfilling his duty to defend the Secretary of State should come to no surprise to Iowans. His office has defended state agencies in lawsuits brought by the ACLU Foundation of Iowa for decades.
“Voting is such an important right that rules regarding the elimination of registered voters should be adopted with full public input and care in drafting using specified criteria and reliable sources. We filed our lawsuit to ensure that the careful rule making process contemplated by Iowa law is followed.”