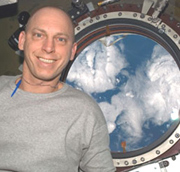 The only Iowa State University graduate to walk in space is joining millions in mourning the death of the original moonwalker. Clay Anderson says Neil Armstrong’s passing is “a huge loss for NASA and a huge loss for our country.”

Armstrong died Saturday at age 82 in Ohio where he was recovering from heart surgery.

Anderson was a rookie in the space program when he first met Armstrong. He recalled Armstrong speaking to his astronaut class about the future of space exploration.

“We can revel in his legacy and all of the things he accomplished,” Anderson says. “He was one of the good guys. He did it with honor, he did it with class, he did it with humbleness, but he did it better than anybody and the fact he was the first human being to set foot on another celestial body is pretty awesome and we’re very proud of him.” Armstrong commanded the Apollo 11 mission which landed on the moon on July 20th of 1969 and he became the first man to set foot on the moon. Anderson says 43 years since that time and Americans have to keep the dream of continued space exploration alive.

“Many kids will say, ‘Did you walk on the moon?’ and it’s sad to have to point out to them that no one’s walked on the moon since 1972,” Anderson says. “The fact it’s been 40-some years is very tragic. I think we should go back to the moon. We are beginning the journey. It just takes big steps and long amounts of time and lots of money and that’s what makes it difficult.”

Anderson says those at NASA, and millions of fans, are excited about exploring Mars through the robotic mission of the new rover called Curiosity. “It’s passed all of its initial tests and it’s going to actually begin doing some data gathering and the things it was sent there to do,” Anderson says.

“It’s always good to have an autonomous capability prior to trying to send humans somewhere because we can learn a lot from what Curiosity discovers and then help to change or alter our plans to make it more safe for when humans go there.” He hopes humans -do- go to Mars “someday, sooner rather than later.”

Anderson flew on two space shuttle missions, he spent more than 160 days in orbit aboard the International Space Station and he participated in six space walks. Anderson is an Ashland, Nebraska, native and earned his master of science degree in Aerospace Engineering at Iowa State University in 1983.