You are here: Home / News / Creston woman with cancer checks one item off her “bucket list” 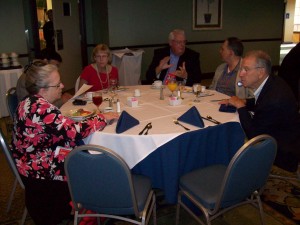 The just-concluded 2012 Republican National Convention in Tampa has been especially exhausting, but also exhilarating for one Iowa delegate.

Sixty-seven-year-old Ruth Long of Creston has dreamed of being a national convention delegate for years.

“It was on my bucket list,” Long said Thursday.

Long has been diagnosed with stage four breast cancer and it has spread to her bones. Negotiating the bus system and the vast convention hall was tiring, but Long’s fellow Iowans and Florida-based volunteers helped, plus Long used a wheelchair so she didn’t have to stand for long periods of time. Long was beaming Thursday morning when she talked with Radio Iowa and reflected on her convention experience.

“It’s my very first national convention. My first trip to Florida. My very first experience with a hurricane which came close but, praise the Lord, it went the other way,” Long said, laughing.

“I am so impressed with that young man and his intelligence,” Long said. “He just seems to have it together on what we need to do in this country.”

Long believes Ryan and Mitt Romney are a “formidable” team. Long’s been part of the Republican Party’s local team in the Creston area for about 15 years.

“My dad was real active and I didn’t get active until my children were grown and I started to realize, ‘Hey, there are some things out there that need attention,’ and I can’t say to others, ‘You go take care of that’ all the time,” Long said. “Some time the buck has to stop here and you’ve got to get with the program.”

Long’s treatment program had included chemo and radiation and now Long’s just taking what she refers to as “a little pill.”

“You know you have a good day when you go to see your oncologist and he says, ‘I am thrilled,'” Long said, laughing. “You know, if you can thrill your oncologist, it’s a super day.”

Long is scheduled to meet with her doctor next week, on Tuesday. Long had hoped to be called to Florida last week, before the national convention started, to serve on the platform committee.

“I have a lot of experience at the state level on the platform committee, however as an alternate delegate, I was not eligible. I guess I’m going to have to put this back on my bucket list and come again four years from now,” Long said, laughing.