You are here: Home / News / Boaters advised to take it slow on waterways impacted by drought 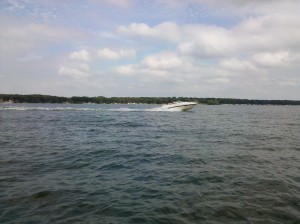 Those spending time on or near the water this extended holiday weekend are likely noticing the impact of the lack of rain this summer. Many lakes are several inches below normal and larger bodies of water, including the Mississippi River, are down several feet.

That’s prompted officials, including the Army Corps of Engineers, to issue warnings to stay in the marked channels. Corps spokesman, Ron Fournier says those who don’t follow the rules, may pay the price. “If they get outside the channel, that’s when they can hit bottom or hit rocks or trees or anything that had been submerged, but is now much closer to the top of the water,” Fournier says.

Commercial traffic on the Mississippi River is not impacted because of the lock and dam system from Dubuque, south to St. Louis. That allows officials to regulate the depth of the water for passing towboats and barges.

Fournier says it’s possible for boaters to have a good time, but paying attention has never been more important. “As the drought causes the river to shorten on the shorelines, the obstructions like logs get exposed. If you’re out there recreating or fishing, you need to be aware that there could be hazards in the water that you will hit if you’re outside the navigation channel,” Fournier says.

Routes are clearly marked on the river, but Fournier suggests boaters reduce their speed to minimize damage in case a submerged item is hit accidentally.