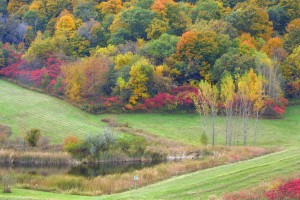 The unofficial end of summer is here and fall-like scenery could be arriving earlier than usual this year.

Iowa Department of Natural Resources Forester Mark Vitosh says this summer’s drought has stressed some trees, which may speed up the process of leaves changing color. “In parts of central Iowa, I’m already starting to see some fall color, which is an indication those plants are deciding to shut down early and try to adapt to the conditions that are here,” Vitosh says.

During a typical year, the fall colors are at their most brilliant in October. Vitosh says the change in leaf color could climax a few weeks earlier this year. “We actually got a similar response in 2008 with the floods. We had a lot of stress on plants in some of the bottom lands and those trees started to turn color,” Vitosh says. “We may see a similar response this year because in some of the flood plain areas, those soils can be rather sandy and we haven’t had a lot of moisture.”

A worst case scenario for fans of fall foliage would be almost no change in color. “The other thing that happens with a drought, instead of getting fall color, you get a lot of nothing…a lot of brown or yellow or the trees just shut down. So, we may not get the brilliant colors,” Vitosh said.