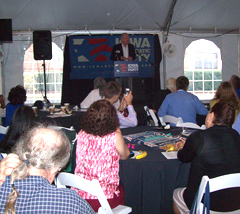 “I got to thinking, you know, he is the perfect icon for today’s Republican Tea Party,” Harkin said this morning, “an old angry white man spewing incoherent nonsense.”

Eastwood spoke at last week’s Republican National Convention in Tampa with an improvised “empty chair” routine that was scheduled to last about five minutes, but went on for 12.

Harkin spoke with Iowa delegates at the Democratic National Convention in Charlotte today, suggesting Republicans had failed at their main task last week.

“Their whole convention was geared to do one thing: to humanize Mitt Romney,” Harkin said, asking the crowd: “Do you think they succeeded?”

The Democrats replied: “No.”

Harkin continued: “I don’t think so either. In fact, every time I see Mitt Romney I think about that little rover Curiosity on Mars, that he’s more suited to be ‘Robot Romney’ driving that around Mars than he is to be a candidate for president of the United States.”

“I was watching his speech and jotting a few notes down and I thought: ‘My God! Pretty soon his pants are going to catch on fire,'” Harkin said, drawing laughter and applause from his Democratic audience.

Ryan is due to campaign in Cedar Rapids late this afternoon and on Wednesday morning he’ll speak at the Dallas County Courthouse in Adel. 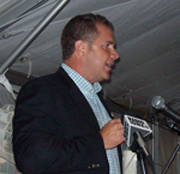 Congressman Bruce Braley, a Democrat from Waterloo, also addressed the Iowa delegates in Charlotte, warning there was “a lot of work to do” before Election Day to elect Democrats from the courthouse to the White House.

“But we’re not going to do it by hanging out with our friends and telling each other how much we love being Democrats,” Braley said. “…We have to go out and find those independent voters, 40 percent of my congressional district, and Republicans who are willing to sit down and talk about what Christie Vilsack will do for them that Steve King isn’t doing right now.”

Republican Congressman Steve King faces Democratic challenger Christie Vilsack this November. Harkin told Iowa delegates it was time to “dethrone the King” and send Vilsack to congress. Democratic Congressmen Dave Loebsack and Leonard Boswell did not make the trip to the convention in Charlotte.