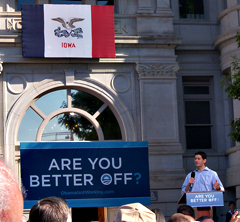 Paul Ryan speaks in front of the Dallas County Courthouse.

“There’s a little thing going on over in Charlotte, North Carolina this week. You’re gonna hear a lot of talk, but you’re probably not going to hear this quote that President Obama made four years ago. ‘If you don’t have a record to run on then you paint your opponent as someone people should run from,'” Ryan said.

“That’s what he said four years ago and that’s exactly what he’s doing today.”

Ryan, a Wisconsin congressman who chairs the Budget Committee in the U-S House says, the Democrats are doing everything they can to avoid talking about Obama’s economic record.

“We are going to hear from President Clinton tonight in Charlotte. My guess is we’ll get a great rendition about how good things were in the 1990s, but we’re not going to hear much about how things have been in the last four years,” Ryan says. 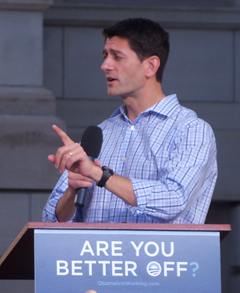 Paul Ryan makes a point during his speech.

Ryan stood in front of a large sign that said “Are you better off now?”.

“The president did inherit a tough situation when he came into office. Any fair measurement of his record, you have to acknowledge that,” according to Ryan.

“The problem is, he didn’t make anything better. He can’t run on his record and so that is why he has run out of ideas and why he is running the type of campaign he is running — based on the politics of envy and division. Hope and change have now become attack and blame.”

He says Obama’s took the wrong step by pushing through the stimulus package.

“They promised that if we borrow all this money and spent it through all these government agencies, unemployment would never get about eight percent. It hasn’t been below eight percent since then,” Ryan says.

“And then he quickly turned to a partisan government takeover of our health care system Medicare is being threatened by Obamacare.” Ryan also recalled “Joe the Plumber” from the last campaign and said it showed President Obama’s philosophy of redistributing wealth.

“It’s this sort of school of thought that the money in America is finite, it’s fixed. And that it’s government’s job to redistribute the slices of the pie however elites in government think it ought to be done,” Ryan explains. “That is not who we are. Our job is to set the conditions for growth and opportunity so that we can grow the pie so everybody can get a bigger slice of the pie. That’s what we do in this country.”

Ryan told a crowd of over 700 that Mitt Romney is the person the country needs to turn around the economy. The event wrapped up a two-day campaign stop in Iowa for Ryan.

The Democratic Party released this statement on Ryan’s event:

“In Iowa, Congressman Ryan repeated Mitt Romney’s welfare lie, but couldn’t say how they’d create a single job now. While the Congressman has proven his willingness to ignore the truth, even he should know that President Clinton has joined with every independent fact checker, news organization, and a Republican architect of welfare reform in calling the welfare attack blatantly false. But it’s no surprise Ryan and Romney are making falsehoods the centerpiece of their campaign – even their advisers have said detailing their plan to raise taxes on the middle class and turn Medicare into a voucher system to pay for tax cuts for millionaires and billionaires would be ‘suicidal.’ That’s because it’s not a recipe for strengthening the middle class – it’s the same failed scheme that crashed our economy and devastated middle class families in the first place.”—Danny Kanner, campaign spokesman