You are here: Home / News / Local Democrat brings her donkey to greet Biden in Ottumwa 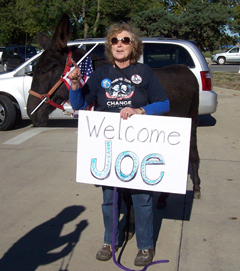 A 71-year-old who describes herself as a “life-long Democrat” brought her two-year-old donkey to greet Vice President Joe Biden and the crowd arriving to see the V.P. this morning in Ottumwa.

“This is a mammoth donkey,” Mary Amborn said. “He is only two years. He’s lost his teeth in the front and so he has a hard time eating carrots.”

The donkey’s essentially a toddler who’s teething, she explained. Wearing a halter, with two American flags tucked beside his ears, Jonathan was silent. No kicking or braying from him either.

“Oh, this is how they are. This is why they love these (animals) in the third world…and he’ll soon be a good, gentle riding horse. He represents us the Democrats now, guys, get that down,” Amborn told reporters, laughing. “He represents us, a good, kind-using people — the donkey.”

The donkey first became associated with the Democratic Party during Andrew Jackson’s campaign for the White House. Opponents were using another term for a donkey to describe Jackson — they called him a “jackass” — and Jackson decided to use the donkey’s stubbornness as an asset.

Amborn raises donkeys and horses these days. She’s retired. She used to be a union worker at the John Deere plant in Ottumwa. Amborn met then-Illinois Senator Barack Obama in Ottumwa in early 2007.

“The way I got him to talk to me, I was over to Agassizz School and he was walking down the hall and I said, ‘You! I’ve got questions for you!’ And he says: ‘O.K,’ and he ducked into this little grade school library and sat down with those great big enormous legs…and just looked right at me, straight at me — no press — and said: “O.K., ask me anything you want,'” Amborn said. “I said, “O.K., you’re my kind of politician,’ so I switched and started working for him.”

Amborn attended Obama’s inauguration and today she’s wearing a t-shirt she bought on that 2009 trip to Washington, D.C. She’s a Biden fan, too.

“He’s mighty fine for an easterner,” Amborn told reporters, with a laugh. “He’d fit right in here any day. We love him.”

Amborn, though, has to skip Biden’s late-morning speech to stay with her donkey, but Amborn told reporter she’s heard plenty of political speeches over the years.