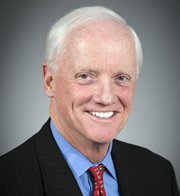 Many Iowa farmers who’ve seen crops wither due to the worst drought in decades are heading into harvest season anticipating dismal yields.

Frank Keating, president and C.E.O. of the American Bankers Association, says farmers who are on the financial edge should meet with their bankers to see about rescheduling their loans or adjusting the terms.

“Those kinds of things are important to do with your banker because he’s locked to the hip with you,” Keating says.

Keating is a former Oklahoma governor and says his drought-strapped ranch near Tulsa has had no crop for two years in a row now. Farmland values in Iowa and across much of the Midwest have been rising for several years, but Keating says the drought could change that if it lingers into next year.

“If the drought continues and if there is less and less of a crop, obviously, that would have an impact on land values,” he says. Some industry analysts have predicted we’ll see a variety of food shortages due to the drought, but Keating isn’t convinced.

“I don’t anticipate that, but I think there will be increased prices, I don’t see how you avoid that,” Keating says. “We’ve had 25 to 35% less corn production this year. Prices are up, which means for those of us in the cattle business, you’re going to pay more for cattle feed that is laced with corn. And obviously, those of us who love corn products to eat, you’re going to pay more as well.”

The drought is impacting more than 20 states and forecasters fear it won’t end in October but may last into spring — or beyond.