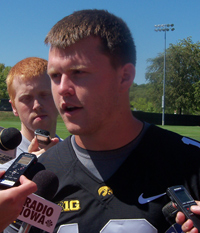 The senior has only one touchdown pass through four games and the passing game is averaging 202 yards in a 2-2 start. That’s down more than 30 yards from a year ago.

Ferentz says there are a number of reasons for their slow start. He says it’s more than one position, and he says they have done some things well in the last couple of weeks, and while they’ve had improvement, it has not been enough yet.

Ferentz says the Hawkeyes are making progress in some areas, but there is nothing he is satisfied with at this point. “You could say the same about our coaching. We’re 2-2 right now. Real simply, if we had scored 33 the other day, we win. If we had scored, or held Iowa State to 5, we win that game too. So that’s the bottom line,” Ferentz says.

The Hawkeyes open the Big Ten race at home against Minnesota on Saturday and Ferentz says this is a better Gopher team than the ones that beat the Hawkeyes the last two years. He says it’s the first time since 2008 that they have started 4-0 and he says the coaching staff has done a great job and the players are playing well.

Ferentz is not surprised coach Jerry Kill is getting the Minnesota program turned around. “He’s got a staff that’s been with him for a long time, they do a great job at it…ultimately you get evaluated on how the team plays and to me that’s what it is all about,” Ferentz says.