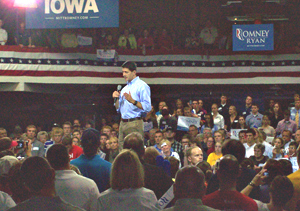 The event was held in the Fieldhouse at Loras College, an institution founded by Catholic priests.

Ryan’s own grandfather graduated from the school in 1919, when it was known as Columbia College.

Toward the end of his speech, Ryan mentioned he saw several priests in the crowd and then Ryan denounced the Obama administration for presuming it could force Catholic institutions to cover contraceptives in employee insurance plans. 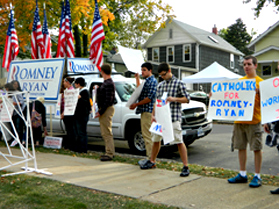 Supporters turn out for Paul Ryan in Dubuque.

Ryan warned Obama would be freer to infringe on religious liberties in a second term.

“If he is willing to trample on our religious freedoms before his reelection, what do you think he will do if he never has to stand for reelection ever again?”

Ryan continued, as the crowd applauded: “Think about how chilling that is.”

Fire officials cut off entry after a thousand people were gathered inside the Loras Fieldhouse. About 800 people stayed outside to watch Ryan’s speech on a big screen television. Ryan spoke to that “overflow” crowd before he boarded the campaign bus and he began by mentioning a sign someone was holding.

“Catholics for Romney/Ryan,” Ryan said. “I couldn’t say it better myself. Thank you so much.”

Ryan arrived on the Dubuque campus early this evening and launched into his campaign pitch at the same time the clock tower on campus was tolling seven o’clock. 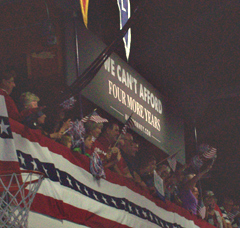 “We’ve got a big choice to make,” Ryan said, pausing before saying, “The bell is tolling.” Ryan and the crowd laughed, then he continued: “It is time and what that bell tells us is we can’t afford four more years like the last four years.”

Ryan’s two-day bus tour through four eastern Iowa cities is meant to showcase his ties to the area, with a mother-in-law from Clinton and his own hometown of Janesville, Wisconsin, just an hour’s drive away from Dubuque. Ryan mentioned a popular ad he remembered from his childhood that touted Dubuque Ham.

“How ’bout a little round of the song? Ready? One, two, three,” Ryan said, before leading the crowd outdoors by singing the jingle. “…I was teaching the kids this song on the way over here. Remember the ham used to dance around a little bit?”

AUDIO of Ryan’s brief remarks (about 3 minutes) to the overflow crowd.

The Romney campaign acquired the actual jingle from the Dubuque Ham ad and played it at the end of the indoor rally.

Ryan is scheduled to start his campaign day tomorrow in Clinton, with a stop in Muscatine over the noon hour. He’ll be in Burlington Tuesday afternoon.

(This story was updated at 10:44 p.m. with additional information.)