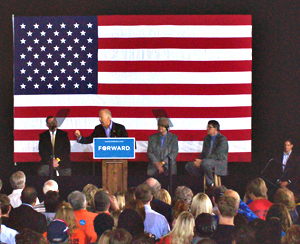 “I’m sure I’m not the only one who was so offended when Governor Romney described 47 percent of our fellow citizens,” Biden said, and the crowd started booing, which Biden acknowledged as he continued: “No, for real…describing almost half the population as not being willing to take personal responsibility, half the population saying we see ourselves as victims.”

Obama campaign ads mention Romney’s reference to the 47 percent, but Obama himself never raised the issue during his first face-to-face debate with Romney.

Biden showed no reluctance in bringing it up in Council Bluffs. “When I hear that talk — not just from the governor and Congressman Ryan, but from the new Republican Party — this thing about the culture of dependency, about America being in decline, I honest to God, I don’t recognize the country they’re talking about. For real, for I know personally like you do hundreds of people who get up every day, facing the most daunting challenges. They put one foot in front of the other,” Biden said, slamming his hand on the lectern. “They keep going.”

Biden also suggested that during the debate Romney had a problem with the “math” and the “facts” regarding his plan to cut income taxes.

Biden ridiculed what he characterized as Romney’s newfound appreciation for the middle class, and the vice president told the crowd he had just talked with the president by phone about last night’s debate.

“You know, I thought he did a great job,” Biden said. “He put forward a clear and specific plan how to get this country moving forward again.”