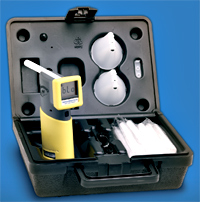 The D.C.I.’s state crime lab has launched a new website where you can check out the results from the drunk driving and public intoxication breath tests taken by police and sheriff departments across the state.

Crime lab technician Jim Bleskacek  has been working on the site for four years, and says it makes it easier to access the test results.

This is all information that is readily available already through the court system, through Iowa Courts on-line. But the only thing that they don’t really do is actually give you the actual level of alcohol, they just say whether or not they are impaired,” Bleskacek explains.

“This site actually gives some public awareness to how impaired people actually are that are out driving on the same roads as you and I.”

You may have seen the ads from the Governor’s Traffic Safety Bureau that promise to catch you if you drink and drive, or drive while impaired. Bleskacek says those ads do a great job of raising public awareness that police are on the lookout, and this site backs them up.

“Without actual data and numbers to show that hey we are actually out enforcing those things that we are saying, they are just idle threats otherwise,” he says. “And this site shows that we are doing an 50 drunk drivers a night on average in the state. And our alcohol levels are twice the illegal limit oh-eight (.08) being the legal limit in Iowa, and our average is 140 to 150. So we are actually enforcing what we’re saying we’re doing.”

Bleskacek says people might also be surprised to see some of the higher levels of alcohol recorded in the testing. “On any given weekend you can easily find results that are over 200, occasionally you’ll get somebody whose results are over 300…you’ll even find somebody who is 350 to 400. And these people are driving vehicles on the same roads you and I are,” Bleskacek says.

Law officers who have done field tests and believe someone is over the legal alcohol limit then bring that person into the department and run the breath test on a machine that automatically sends it to Bleskacek’s office for analysis. The results from those 160-plus machines are now available on the website.

“You know, putting a penny in your mouth doesn’t work. Eating you underwear to absorb the alcohol in your stomach, that doesn’t work. The only real way to beat the test is to don’t drink and drive,” Bleskacek explains. He says the website also enables visitors to check records related to the testing and certification of breath alcohol instruments, training status for particular officers.

You can see the alcohol test results at: breathalcohol.iowa.gov.