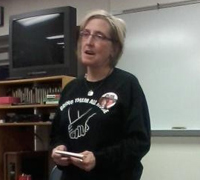 Saturday marks three months since two young girls from the Waterloo-area vanished. The cousins, Elizabeth Collins and Lyric Cook of Evansdale, disappeared July 13th while on a bicycle ride and they’re still missing.

Robin Arnold, of Cedar Falls, says she was frustrated by how the situation was handled by law enforcement and she’s calling for change.

“It was seven days and they kept saying they were not abducted,” Arnold says.

“On the seventh day, they finally said, ‘The girls have been abducted.’ I got very upset and angry at that because I felt it went too slow, the process just went too slow.”

Arnold is the author of a bill she has forwarded to state legislators for consideration in January which would speed the process of finding a missing child.

She says she’s gotten more than 9,500 signatures of support on petitions. She calls it “The Cousins Law” and it contains several parts.

“When a child goes missing, the parents need to report it within an hour or there’ll be a fine,” Arnold says.

Under the proposal, there would also be voluntary vehicle searches and searches of abandoned buildings. If a child is missing more than three hours, a statewide alert would be issued with pictures for use by the media and on interstate marquees. If the child is missing more than eight hours, a human trafficking task force would be activated to check known hotspots where children could be taken.