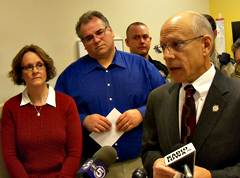 Mike and Jan Rozga listen as Dale Woolery talks at one of the news events held on the dangers of synthetic drugs. (L-R))

An Iowa couple and their teenage son have been named “Advocates for Action” by the White House Office of National Drug Control Policy.

In 2010, 18-year-old David Rozga of Indianola committed suicide after smoking K2, which was legally sold in Iowa at the time. Mike Rozga and his wife immediately became crusaders, warning of the dangers of the product.

“We actually gave our first talk, so to speak, at David’s funeral,” Mike Rozga said during an interview in 2011.

“We had the opportunity to talk to probably upwards of a thousand people, including young people that were there, and we didn’t want to miss that opportunity.”

Mike and Jan Rozga — along with their son, Daniel — have lobbied for state and national laws that ban the sale of products like incense and bath salts that cause significant side effects.

“Don’t get me wrong. I understand there’s a cost associated with incarcerating somebody,” Rozga said in 2011. “But what price has my family paid?”

According to Rozga, use of these chemical compounds can cause hallucinations, panic attacks, black outs — and some victims have reported vomiting for hours.

“It’s a dangerous drug. It’s being marketed to, primarily, our kids and young people under false pretenses,” Rozga said during an interview at the Iowa capitol. “It’s sold under the disguise of being synthetic marijuana and, if you listen to the reactions that people have to that drug, it doesn’t sound like marijuana.”

The Rozas have written a blog post about their work which is featured on the White House Office of National Drug Control Policy’s website. The family says it “has been a slow, difficult, and painful process” to talk about their son’s suicide after smoking K2, but they believe they are “making a difference” in the fight against a new generation of synthetic drugs.

Dale Woolery of the Iowa Office of Drug Control Policy, says the Rozgas have already put hours and hours into getting out the word on the dangers of synthetic drugs. “They’ve been working dilligently to try and get laws changed and to educate, it’s been both legislation and education for them. And they’re doing it on a voluntary basis, they have picked up the baton and they’ve really run with it,” Woolery explains.

“And I do think not only here in Iowa, but on the national level with the laws that have been put in place, I think they’ve been a big part of that.” Woolery says the family has taken the worst of tragedies where they lost a loved one and turned it into something where they have helped to save lives.

“I think they’ve seen it that way, that they want David’s legacy to be lives saved. And I really think that that’s probably the case. We can’t count them. I don’t think we will really know how many lives have been touched,” Woolery says.