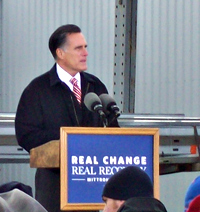 Over the noon hour Republican presidential candidate Mitt Romney spoke to a large crowd in Ames gathered outside a manufacturing facility, promising he’ll bring “real change” to the country.

“This is an election of consequence. Our campaign is about big things because we happen to believe that America faces big challenges,” Romney said.

“We recognize this is a year with a big choice, and the American people want to see big changes. And together we can bring that kind of change — real change — to our country.”

Romney spent much of his 20 minute speech critiquing President Obama’s record, faulting Obama for failing to “repair” the economy.

“Today we received, by the way, the latest round of discouraging economic news,” Romney said.”Last quarter our economy grew at just two percent. After the stimulus was passed, the White House promised that the economy would now be growing…over twice as fast. Slow economic growth means slow job growth and declining take home pay. That’s what four years of President Obama’s policies have produced. Americans are ready for change.” 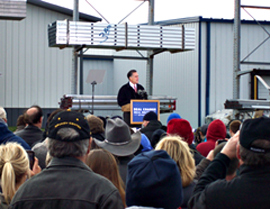 Romney ridiculed President Obama’s 2012 campaign slogan of “forward” and he used the words change, changed, changes and changing 21 times in his 20-minute speech today to make the case — as Obama himself did in 2008 — that it’s time for a “change” election.

“It requires that we put aside the small and the petty and demand the scale of change we deserve,” Romney said. “We need real change, big change. That times has come.”

Romney promised that he and running mate Paul Ryan could “confront” the problems politicians “have avoided for over decade” — like the looming insolvency of Medicare and Social Security and the escalating national debt.

However, Romney promised to work across party lines to bring about change.

“This is election is a choice, a choice between the status quo, going forward with the same policies of the last four years,” Romney said, “or instead choosing real change, promise that the future will be better than the past.”

Romney campaign aides say about 3500 people gathered on the concrete of a construction company’s property to hear Romney today. Romney repeatedly stressed the importance Iowa’s six electoral votes have in this year’s contest.

“Don’t think this is the last you’re going to see the last of me and Paul Ryan because this state may be the state that decides what kind of America we’re doing to have,” Romney said, to cheers. “…We’re counting on you.”

Romney’s event was held at Kinzler Construction Services in Ames. Democrats say the firm received $650,000 in Department of Energy contracts financed by the economic stimulus Romney criticized.  Senator Tom Harkin joined other Democrats at an afternoon news conference in Ames to denounce Romney’s economic strategies. Harkin said Romney was trying to “hoodwink the American people into believing he’s for the middle class.”

On Monday, Romney will return to Iowa for an event in Davenport. First Lady Michelle Obama willspeak at campaign rallies in Iowa City and Sioux City on Monday afternoon.

(This story was updated at 4:54 p.m. with additional information.)