You are here: Home / News / Branstad says recent report will be fodder in contract talks (AUDIO) 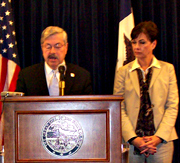 Governor Terry Branstad says a recent analysis of state worker benefits and salaries should provide “another viewpoint” to discuss during contract talks with state employee unions.

“We need to review and analyze and determine what makes the most sense and how we can be competitive, but also fair to our employees in the process and, obviously, that information I think will just increase our chances of making the best and most informed decisions when it comes to setting salaries and also negotiating them through the collective bargaining process,” Branstad says.

Branstad’s Department of Administrative Services director commissioned a review which found revealed details of a survey which found the “base” pay for employees in the executive branch of state government is nearly 18-percent higher than for similar jobs in other governments and in the private sector.

The leader of the union that represents the greatest share of state workers dismissed the report as “posturing” from the governor for contract talks, which begin in mid-November. The AFSCME Council 61 president also said arbitrators do not consider comparisons with private sector pay and wages when deciding public sector contracts.

The governor says this new information will be compared with reports from a conservative think tank and a liberal think tank.

“One group says Iowa has the highest public employee salaries visa vis all the other 49 states and the other one says, ‘No, our salaries are below (other states),’ so you have a wide variance there,” Branstad says. “So we looked to an outside, objective group that would come in and compare us with other states, both public and private sector, so now we’ve got three different viewpoints.”

Another analysis of state worker pay by The Cedar Rapids Gazette found women who work in state government are paid about 91 percent of what men are paid for doing the same sort of job.

“That’s something we want to continue to look at and work on. I’ve chosen a number of women for key positions, leadership positions in state government,” Branstad says. “…I would be interested in taking a look at to see if there are other adjustments or changes that we need to make.”

The median salary for women who work in state government was about $45,000 last year; while men had a median salary of about $50,000. Branstad says it may take legislative action to address some gender-based pay inequities as, for example, the salary ranges for the directors of state agencies are set by legislators.

Branstad made his comments in response to reporters’ questions at his weekly news conference at the statehouse.