You are here: Home / Fires/Accidents/Disasters / Rail cars go off the track in Lyon County forcing evacuation 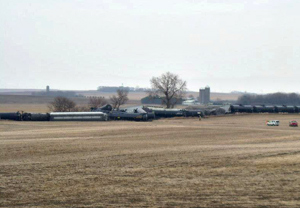 Rails cars went off the track near Lester in Lyon County Sunday.

Investigators are trying to determine the cause of a 25-car train derailment in far northwest Iowa which led to the evacuation of a small number of people Sunday morning.

Some of the derailed cars were carrying LP gas.

She says reports were that one of those cars had been compromised. As a precaution ,the Lester Fire Department evacuated 12 residences. Crews were on site on Sunday determining the best way to clear the cars.

McBeth reports the train was traveling from Sioux City to Willmar, Minnesota. The train was carrying freight of all kinds. The crew was not injured in the incident, according to McBeth.