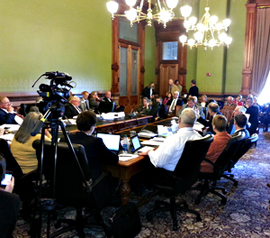 Concerns were raised today about new rules that will change the way the Iowa Board of Parole votes on releasing some prison inmates, but a legislative committee ultimately took no action to block the changes from taking effect next month.

Iowa prisoners considered at the highest risk for reoffending, who are up for parole, currently require votes from all five parole board members.

The change would reduce the required votes to three. Carlstrom said three parole board members are part-time, so they work on a rotating schedule – meaning it takes 60 days to record all five votes.

“And it is very rare that one of the fourth or fifth board members will override the votes of the other three. It doesn’t happen that often,” Carlstrom said.

Karl Schilling, president of the Iowa Organization for Victim Assistance, said public safety concerns should “trump” any potential cost savings associated with releasing an inmate. “It seems to me that matters of money, efficiency and convenience should be overridden by the possibility of someone else being hurt or killed,” Schilling testified.

Schilling urged lawmakers to keep the rule requiring votes from all five parole board members, rather than reducing it to three. “The overwhelming concern of our organization is public safety,” Schilling said. “I don’t see how changing the rule (from five to three votes) would enhance public safety.”

Carlstrom, the parole board chairman, said he doesn’t believe the change will result in more high-risk inmates being granted parole. “I can see how there might be a concern – that public safety is reduced. It is not at all,” Carlstrom said.

“The board members are intelligent, conscientious people who are there to do a civic duty. We want to make sure we do good work and do the right thing.” Larry Wohlgemuth also spoke out against the change in parole board operations.

Wohlgemuth said he was sexually and physically abused for eight years as a child and spent 40 years suffering from Post-traumatic Stress Disorder. “If this change is to be made, let’s make it for the right reason. And if prison populations are to be reduced, let’s do it through responsible legislation,” Wohlgemuth said.

Carlstrom said public safety remains the parole board’s top priority, but he noted the additional time prisoners remain behind bars awaiting parole board decisions costs taxpayers an estimated $500,000 a year. “To the extent that there’s been consideration and discussion about budgetary issues, that’s just the reality. We have to do this as efficiently as we can,” Carlstrom said.

The legislative committee could’ve blocked the rules, but no motion was made calling for a vote on the matter. Carlstrom said the changes will take effect on December 5. He noted the parole board reviews roughly 16,000 parole cases per year. Around 2,000 inmates per year are granted parole.