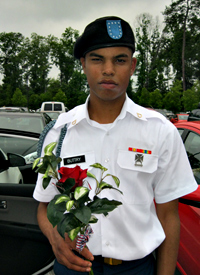 The family of a southwest Iowa soldier who was killed in Afghanistan earlier this month has issued a statement, saying Brandon Buttry’s childhood dream was “to be a U.S. soldier.”

Private First Class Brandon Buttry of Shenandoah was 19 years old when he was killed on November 5th. He enlisted in the Army in 2011 and was deployed to Afghanistan this past July.

Buttry had eight sisters and five brothers. His siblings, along with his mother and father, issued a written statement this morning.

The family says Buttry had “an infectious smile” and enjoyed playing board games with his family. The family’s written statement says Buttry “had a big heart for others” and “was not afraid to stand up for what he believed in.”

A visitation will be held this evening at the First Baptist Church in Shenandoah. His family says “Brandon was a born-again Christian and loved the Lord.” His funeral will be held Thursday at the same church.

Governor Branstad has ordered all flags in Iowa to be flown at half-mast Thursday in honor of Buttry. Rows of American flags already line several streets in Shenandoah, as a tribute to the fallen soldier.

People in the community also are bracing for the arrival of a family from a Kansas church who stage protests at military funerals. A group of motorcyclists called “The Patriot Guard Riders” have assembled at other military funerals in the state, to shield soldiers’ families from the Westboro Baptist Church protestors.