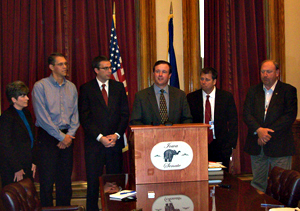 Bill Dix was elected the new leader of Senate Republicans.

Senate Republicans have unanimously elected a new leader. It’s Bill Dix of Shell Rock who served a decade in the Iowa House and has been a state senator since January of 2011.

“It’s an exciting day here and we Republicans are ready to go to work,” Dix said this afternoon after his election.

Previous Senate GOP Leader Jerry Behn of Boone did not seek reelection to the post when the 23 Republicans who’ll serve in the Iowa Senate this January met today.

Republicans had hoped to take a majority of seats in the Iowa Senate in last week’s election, but Democrats held onto a two-seat advantage, meaning Democrats again will control the debate agenda in the senate. Dix struck a conciliatory tone when he spoke with reporters this afternoon.

“As we look to what we want to accomplish, we are mindful of the voters who sent us here to do their work and we know that it’s going to be important that we cooperate and look to find common ground with Senate Democrats as we work to do the work of the people,” Dix said.

But Dix also made it clear that if Republicans find a way to get a statewide vote to ban same-sex marriage or advance abortion restrictions, they’ll pursue it.

“There are a number of members of the Senate Republican Caucus who continue to hold expectations that we can find ways to protect the life of the unborn and give people the opportunity vote on marriage,” Dix said.

Dix praised previous Republican leaders in the senate, but described himself and a handful of others who were elected assistant leaders as “best” for now.

“We are a team and we are unified and…today I feel everybody is excited about the prospect moving forward,” Dix said.

Rick Bertrand of Sioux City was chosen by his colleagues to be Senate Republican whip and five others were elected assistant leaders. One state senate race is undecided. Pat Ward, a Republican from West Des Moines who was seeking reelection to the senate in a new district, died in October. A special election for that senate seat will be held December 11.