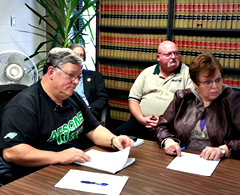 Danny Homan, president of Local 61 of the American Federation of State, County and Municipal Employees (AFSCME), says the proposed two-year contract would make no changes to the state’s health insurance program.

“I think that’s a very reasonable proposal,” Homan said. “One of the big things our members are concerned with is their health insurance.”

The Iowa Department of Administrative Services (DAS) will respond with the state’s initial contract offer on November 30.

The vast majority of state employees currently do not contribute anything toward their health insurance premium. Governor Branstad has suggested state employees should pay 20-percent of their premiums. Homan said AFSCME members aren’t interested in changing the current plan.

Late last month, the DAS released a survey showing state workers in Iowa are paid nearly 18-percent higher wages than similar positions in city and county governments and in the private sector. Homan called the survey misleading, inaccurate and invalid.

“They call it a comprehensive study. All they did was gather 27 other wage surveys and compile it into one. That’s not a comprehensive study,” Homan said. “They’ve yet to release where those studies got their sources from, so it’s an invalid study. And I believe the same one (DAS) did on health insurance is invalid.”

An earlier DAS study reviewed the benefits state workers receive and concluded $116 million could be saved if all state employees paid 20 percent of their health insurance premiums. Homan said the wage increases requested for the next two years represent half of what the union asked for two years ago.

“So, we’re coming in with a much lower wage proposal than we have in the past,” Homan said. “Bear in mind, I would say this state is no longer in a recession. We have a billion dollar surplus.”

In response to the AFSCME proposal, Governor Branstad’s office released a report from the Iowa Department of Management claiming the union’s request would raise the state’s expenses by $122 million in fiscal 2014 and $159 million in 2015.

The Iowa Department of Management today released this statement on what it says are the costs associated with the collective bargaining proposal put forth today by the union: