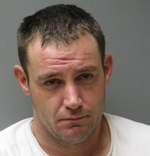 A two-year-old boy has died after police say he was taken to a hospital with severe burns.

“Right now, we feel the injuries and trauma to the child are suspicious,” Baxter says. “There were some other individuals at the residence and present at the time. We’re obviously talking to them as well, but (Reed) is certainly a person of interest in this case.”

Hospital officials said the child had “obvious submersion burns” and head trauma. Baxter would not say if the child was burned by bath water.

“Obviously, that’s often the case with submersion burns or exposure to extremely hot water,” Baxter said. “Additionally, there’s some head trauma…we’re in the process of determining the specifics of how those happened.”

An autopsy is being conducted to determine the boy’s exact cause of death. Reed is currently charged with child neglect or abandonment. Following a search of Reed’s home, police also charged Reed with two counts of manufacturing meth and marijuana.