You are here: Home / Human Interest / New sculptures light the way to Ames 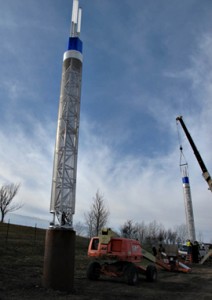 Light columns being installed in Ames.

Officials in Ames  hope motorists along Highway 30 and Interstate 35 at the southeast edge of the city will see the light.

To help them out they’ve installed 12 light tower sculptures along the interchanges of the highways.

City planner Jeff Benson says the towers have been in the works for some time. “You know it started from requests of property owners down there about 10 years ago,” Benson says.

The city hired consultant to get input on a design for the entryway and eventually came up with the light sculpture idea.

Hundreds of people travel the highways, and Benson says they made sure the sculptures were going to be something that were enjoyed, but didn’t cause problems.

Thousands of people come to Ames every year to visit Iowa State University and attend entertainment or sports events, but many more drive right on by on the two four-lane highways. Benson says one of the people who gave input on the light sculptures said they needed to draw more attention to the city.

These sculptures are believed to be unique to Iowa and Benson says there are not many others that he knows of in the U.S. He says he knows of a sculpture in Wichita near the intersection of several interstates near the airport and he says there is a famous set of light sculptures in Los Angeles near the entrance to the new airport there.

There are six columns on the north side of the highway, and six on the south side. Two small light columns are located on the east and west sides of Dayton Road south of South 16th Street. The columns, which rest on limestone bases, were designed by David Dahlquist, an artist whose work also appears on Main Street in Ames.

Dahlquist also designed a tower in Urbandale and the lighting on the High Trestle Trail bridge near Madrid. The project was funded through a partnership between the City of Ames, area businesses, and a transportation enhancement grant from the Iowa Department of Transportation.

The city plans to hold a ceremony celebrating the completion of the project on December 20th.

Photo courtesy of the City of Ames.