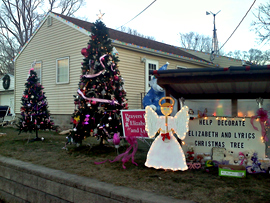 A memorial to Elizabeth Collins and Lyric Cook-Morrisey.

Hundreds turned out last night for a celebration of life event to honor an eight-year-old northeast Iowa girl who went missing last summer.

Elizabeth Collins and her cousin were last seen riding their bikes in Evansdale.

Their bodies were found last week and Elizabeth’s mother told the crowd gathered in a Cedar Falls church that the family had been planning a celebration when her daughter came home — and now she is home with God.

Heather Collins thanked her family, friends and the community for their support over the past five months. She and her husband spoke with reporters after the service.

“The service was absolutely amazing,” she said. “Seeing all the people that were there — it was overwhelming.”

A slide show of photos was projected on the big screen at the front of the church and Elizabeth’s parents arranged for her favorite songs to be sung. 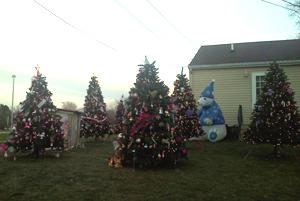 Residents have been stopping by the home of Randy & Tammy Marvets in Evansdale, decorating Christmas trees in memory of Elizabeth Collins & Lyric Cook-Morrissey. The Marvets’ originally placed one tree in their front yard in November. In the past three weeks, the number has grown to six.

Before the service, Drew Collins told reporters he wants to see the person responsible for his daughter’s death receive the death penalty.

“We don’t want this person to be able to hurt anybody else because whoever it is is sick and we’ll feel a lot better once that person’s is in custody,” Drew Collins said. “But I don’t think there ever can be closure in something like this. We’ll have to live with it the rest of our lives.”

Collins said he has always believed in the death penalty.

The couple will meet with Governor Branstad on Monday to talk about the death penalty issue. Branstad supports a limited form of capital punishment that would apply in a case like this, but this past Monday Branstad said it was unlikely the Democratic leader in the Iowa Senate will bring a death penalty bill up for a vote. Collins vows to be a vocal advocate for the death penalty.

“A lot of the people that are against the death penalty believe in abortion and that makes absolutely no sense to me,” Collins said. “…A lot of those people will probably fight us along this road that we’ve got to go, but we’re going to fight them.”

The father of a teenager who was kidnapped and murdered in Waterloo six years ago will accompany Drew and Heather Collins to Monday’s meeting with Branstad. A Des Moines woman whose son has been missing since 1982 and Republican Senator Kent Sorenson of Milo will be there, too.

Sorenson plans to sponsor a bill that would restore capital punishment in Iowa.