You are here: Home / Fires/Accidents/Disasters / Names released for victims in I-35 crash 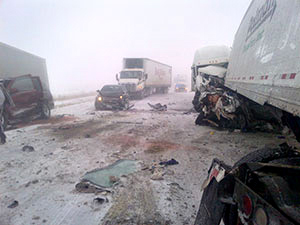 Two people died in this accident involving some 25 cars on I-35 north of Highway 20 Thursday.

Authorities say a Clear Lake woman was among the two people killed Thursday in a 25-vehicle pileup on Interstate 35 between the Dows and Williams exits.

The state patrol says 27-year-old Colby Bostick got out of her vehicle after her car was hit to check on her child.

While she was outside her vehicle, she was struck by another car. The Des Moines Register reports that Bostick was pregnant with twins at the time of the accident.

Also killed in the pileup was 43-year-old Sheila Blood of Arkansas who was driving along when her vehicle was struck.

Seven other people were injured in the accident.

The state patrol says poor visibility caused the accident when drivers were unable to see vehicles that had slowed or stopped, causing a chain reaction of crashes.