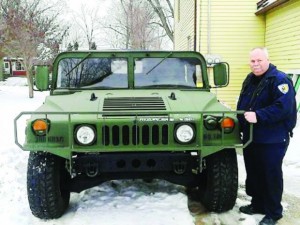 A police department in southeast Iowa has added an unusual vehicle to its fleet of squad cars. It’s a 2011 U.S. military style Humvee.

Wapello Police Chief Wayne Crump acquired the Humvee through a program that provides surplus military equipment to law enforcement agencies at no cost. “It’s a U.S. military Humvee. It’s a four-wheel drive, six-cylinder diesel engine with only 7,000 miles on it,” Crump said. “Currently, it is in the Army green. Our department is looking at having it repainted to match the rest of the squad cars we have.”

Many Iowa police departments use the 1033 Law Enforcement Support Office program to obtain surplus military weapons and protective gear for free. The agencies are only required to pay for delivery costs and any needed repairs.

Crump jumped at the Humvee offer and believes his office will put it to good use. The last vehicle his agency purchased, in 2011, was a 2009 Dodge Charger. “I was working the day the big snowstorm came through a couple weeks ago with the Charger. The Charger is great, but in the snow it didn’t operate that well. I actually got stuck while going to help someone who was in a ditch,” Crump said. “With a vehicle like (the Humvee), we’ll be able to go right through the snow without a problem.”

Crump and an officer with the Wapello Police Department drove to Fort McCoy, Wisconsin to pick up the Humvee on December 26. The reaction to the acquisition from residents of Wapello has been mostly positive, according to Crump. “There are a few (people) out there who think it’s a waste of time and money,” Crump admitted. “But…it cost us $124 in fuel to drive the Humvee back. So, I don’t think you can complain about a 2011 vehicle for $124 worth of fuel.”

The Wapello Police Department must maintain the Humvee and when the agency is done using it, whether it’s working or not, the vehicle must be returned to the U.S. government. Crump said the Humvee will be outfitted, like any other squad car, with lights, a radio, sirens and other equipment.