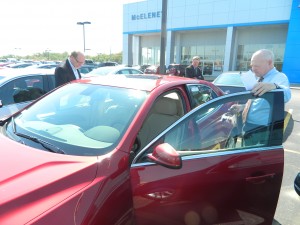 New car and truck dealers in Iowa sold a lot of vehicles last year. Bruce Anderson is president of the Iowa Automobile Dealer’s Association. He says Iowans purchased 130,420 new cars and trucks. That’s up 9.8% from 2011.

Anderson credits the overall improving economy and low interest rates. “Plus, the credit has eased. In 2008, 2009 and well into 2010, it was almost impossible to get a car loan on any kind of agreeable terms. That seems to be behind us,” Anderson said.

In addition, vehicle manufacturers are on the rebound from the recession, so the roughly 325 dealer lots across the state are “well stocked,” according to Anderson. That means Iowans in the market for a new car or truck have more selection.