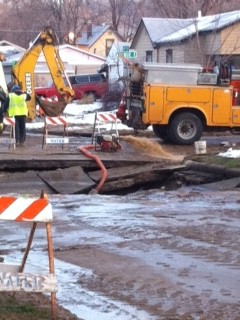 Near 9th Avenue and F Street in Council Bluffs

The City of Council Bluffs is under water boil order as crews are working to repair a major water main break that occurred early this morning. Part of a residential street collapsed at 3 a.m.

David Froth said he awoke and saw the road caving in near his home. He ran to the aid of a neighbor who was driving up the street and crashed into a large hole. “It’s a little scary seeing something like this and then trying to help your neighbor out of his own car,” Froth said. The motorist was not injured.

Council Bluffs Water Works General Manager Doug Drummy says the water main break has left hundreds of residents in the area without running water. “We believe we lost about three-million gallons of water in a 60 minute period of time,” Drummy said.

That huge drop in pressure forced officials to issue the boil advisory as a precaution. “When we have that type of loss of pressure, it is possible something can get inside the water main. We believe the risk is very low,” Drummy said. The water main break is in the area of North 9th Street and Avenue E in Council Bluffs.

Council Bluffs Water Works customers should boil water for one minute after it starts bubbling before using it, Drummy said. If possible, people should revert to using bottled water.

Some stores in Council Bluffs reported running out of bottled water this morning – but were anticipating supply trucks would be bringing more within a few hours. It’s unclear when the “boil only” advisory will be lifted.