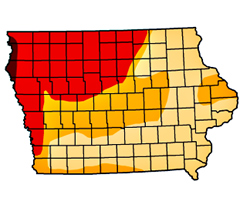 The darker the colors on the map, the more severe the drought conditions.

Just because there’s snow on the ground in Iowa doesn’t mean the drought is over. Experts at the National Drought Mitigation Center are keeping a close eye on conditions across the Midwest this winter.

“Pasture, range and forage for livestock producers all across the heartland here and they’re coming off already two pretty bad summers especially in the Southern plains and there has been no chance for that pasture and range to recover and there hasn’t been precipitation to do that,” Svoboda says.

“That doesn’t just pop right back in a couple of weeks. That can take years to recover.”

It’s still too early to know if the drought will continue well into 2013 but Svoboda says there are already some foreboding signs. “We’re not running with an abundance of precipitation over the fall period so that’s strike one,” Svoboda says.

There has been a good amount of snowfall already this winter in some northern states, but he says we’ll need a lot of rain this spring or we’ll likely have a repeat of last year. Svoboda says the lack of snowfall for a second consecutive year will cause a lot of problems for some farmers, like wheat producers.

“You want that snow not just for moisture but for insulating that crop, helping with emergence,” Svoboda says. “Back in the fall, we didn’t get a lot of widespread good rains to help with the emergence, so we had a lot of exposed soil that was blowing around in the fall, that was still a concern. Because of the lack of forage, they were bailing a lot of the cornstalks to get forage and feed. Without that on the field, you have less stuff to capture that snow when it does fall.”

A federal report last week found more than 60-percent of the country is still under drought conditions, including all of Iowa. That report also said it would take a total of eight-feet of snow this winter to overcome the drought by spring. The National Drought Mitigation Center is based in Lincoln, Nebraska.

You can see the complete drought map here:  droughtmonitor.unl.edu