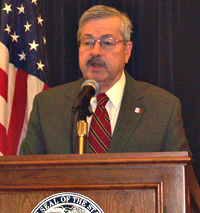 Governor Terry Branstad is urging legislators to seize the “opportunity” to ensure all Iowans have a better quality of life.

Branstad’s delivered his annual “Condition of the State Address” to legislators this morning, focusing on three areas. (Watch IPTV’s video of the speech here; the audio of the speech is below.)

The first was economic development and primarily his plan to cut commercial property taxes by 20 percent over the next four years. That is half of what Branstad recommended last year.

Under Branstad’s new proposal, the state would send millions to city and county governments to make up for the lost property tax payments from commercial property owners.

In the fourth year, when the 20 percent cut would be fully implemented, the governor would commit $400 million in state money for local governments.

Branstad’s second priority area was education and the governor touted on many of the reform ideas he outlined Monday, including a call to raise the starting salary for teachers to $35,000 a year. Branstad’s third focus was on quality of life issues, like an effort to recruit new doctors who will deliver babies or work in an emergency room in a hospital in rural Iowa.

Branstad acknowledged his proposals required a “heavy lift” from lawmakers.

“Iowans are entering a period of unprecedented opportunity and we in this chamber have it within our grasp to help foster this state’s greatest economic expansion and quality of life improvement in modern history,” Branstad said.

Branstad repeatedly used the word “opportunity” in his speech.

“The coming decades can be ours if we’re bold enough to make these incredible opportunities our new Iowa reality,” he said.

Branstad calls his agenda “focused” and the governor told lawmakers his proposed budget is “built on the principles of stability and predictability.”

“An honest assessment would suggest we still have much work to do,” Branstad said. “I reference our on-going efforts to reduce property taxes and to adopt a truly transformational educational system.”

Branstad stressed his proposal to give top teachers more pay if they take on leadership roles, like mentoring younger teachers. According to the governor, previous education reform efforts have not gone far enough.

“We were reminded yet again last month when a new study showed our students’ ranking on vocabulary tests had slipped into mediocrity. Let me ask you this very hard question:  When did we decide that middle of the pack was good enough when it came to our Iowa’s children’s education? Did we really make that decision or did we simply allow it to happen through inaction?” 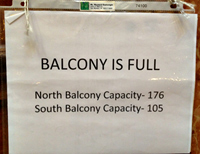 Branstad invited school kids from around the state to sit in the public galleries in the House to watch his speech. The other viewing seats in the balconies were occupied by Branstad’s top administrators and other state officials.

The viewing galleries were closed to the public at 5:30 p.m. Monday. Members of Iowa Citizens for Community Improvement rallies in the hallways of the statehouse, chanting as Branstad made his way from his office on the first floor up to the House chamber on the second floor of the capitol.

(This story was updated at 10:28 a.m. with additional information.)