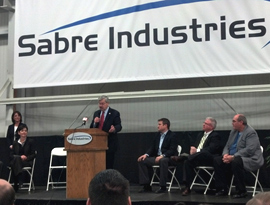 A host of state and local leaders were on hand Thursday for the dedication of Sabre Industries’ new manufacturing plant in Sioux City.

Sabre President and CEO Peter Sandore admits the decision to expand in Sioux City — rather than relocate out of state — was based in part on the economic incentives package extended by the city and state.

“The package that they offered, including the incentives and the land, I think were a big contributor,” Sandore said.

“The other part was we had a great management team here already, so we thought we could build off that management team…and be a lot more efficient facility than if we had to go build a whole new team in another area.”

Sabre Industries, which manufactures towers, poles and other utility structures, is based in Texas.

“We’re really excited because of the number of jobs and the high skilled nature of those jobs,” Dougherty said. Governor Branstad was among the officials to attend Thursday’s dedication ceremony.

Later this year, Sabre plans to expand the new facility even more and move all of its workers in Sioux City under one roof.