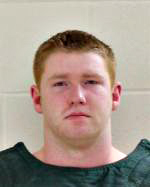 A Waterloo man faces up to 50 years in prison after being convicted of murdering a Mason City man last April.

James Farnsworth was convicted of second-degree murder in the death of Ian Decker. Farnsworth, who had posted $200-thousand cash bond back in May, was taken into custody shortly after the verdict.

Farnsworth claimed he was acting in self-defense. Cerro Gordo County Attorney Carlyle Dalen says the family of the victim was pleased with the jury’s verdict. He says the outcome was one the family can live with, thinking that Farnsworth should take responsibility for his actions of taking a knife and killing another human being.

Dalen says the events leading up to the fatal fight could have factored into the jurors’ minds in returning the second-degree murder verdict. He says it’s hard to speculate on what the jury did in chambers. Dalen says Decker had come at Farnsworth, and that might have played into the “murder two” verdict.

He says nothing surprised him anymore, and believes it was something Farnsworth and his attorney talked about what strategy to use and thought it was best to have the jury decide the case on the witnesses that had already taken the stand.

A sentencing date will be set at a later time.