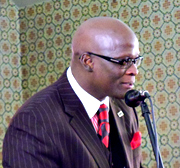 A Florida native who attended college in Iowa was the keynote speaker at Monday’s state Martin Luther King Junior Day celebration. Eddie Moore Junior is currently the director of diversity of the Booklyn Friends School in New York.

Moore said the country has made many strides in equality, but said statistics showing a gap in the performance of African American students in education and the huge numbers of African Americans in the prison system, are some of the evidence that there is much work left to be done.

“If we’re going to make some significant changes, I don’t know about you all, but I’d like to see in my lifetime at least some of the gaps shrinking. Just the appearance of people of color is not enough, for me,” Moore said. Moore said the Jim Crow laws that forced segregation were intended to psychologically impact those who were being segregated, and that psychological mindset is still evident in our country.

“So we must seek solutions with cooperative and collaborative teams, diverse folks working together. We must solve these problems only when we are able to admit the fact that these problems exist,” Moore said. “You can’t change system when you don’t understand how it was created.”

Moore said we should not stop with King’s dream, we should keep dreaming for more. “It’s time to go beyond Dr. King’s dream. It’s time to take action against those folks who threaten the very fibers of peace equity and justice. Whether they are individuals, systems, institutions, organizations,” according to Moore.

“The challenge for diversity in the 21st Century is maximization. Optimize the diversity that’s in the room. The presence of diversity is not enough. To me, you are only going to be successful when everybody in that room can be who they need to be at the highest level possible,” Moore said.

Moore left Florida to come to Iowa to attend Cornell College in Mount Vernon and play football. He earned a P.H.D. in education at the University of Iowa where his dissertation research topic was “The Education Experiences of African-American Football Players at Small Colleges in the Midwest.” Moore said coming to Iowa to go to college saved his life.