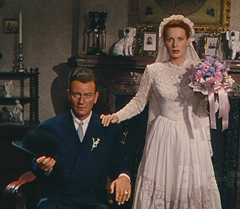 The much-loved movie “The Quiet Man,” starring Iowa native John Wayne, is being released in a specially-restored Blu-Ray edition DVD this week.

The film from 1952 features Wayne as an Irish-American boxer who returns to the Irish village where he was born.

Brian Downes, executive director of the John Wayne Birthplace Museum in Winterset, says it’s been well over six decades since the classic movie was shot, so it’ll be a thrill to see it restored and in high-definition.

“It’s like Christmas that the movie’s coming out on Blu-Ray because it’s looked so fuzzy for so many years,” Downes says.

“I don’t think there’s many people living who actually saw it in pristine condition. This is very exciting. I’m a huge ‘Quiet Man’ fan and there’s legions of us.” The museum in southwest Iowa plans to hold a showing of the film on the big screen in May that will be attended by actress Maureen O’Hara, who was Wayne’s red-haired Irish love interest in the film.

Downes says he’s had the pleasure of getting to know O’Hara over the years and she was elated to be invited to Iowa for the distinctive screening. “Like John Wayne, she’s very much the same person in person that you’d see on the screen,” Downes says.

“She’s very feisty and she’s very determined. She likes to pretend that she’s serious and angry about things but she has a twinkle in her eye and that gives it away.” The events in Winterset are planned for May 24th and 25th. They’ll include a Western swing dance and barbeque on Friday night, the showing of all five movies that starred Wayne and O’Hara, and an Irish-themed dinner on Saturday night with bagpipers, dancers and singers singing songs from the movie.

Downes says O’Hara will be the guest of honor at the dinner but at age 92, he’s not sure about her doing autograph sessions or anything of the sort. “We have no idea how it’s going to turn out but we’re planning on a

“She certainly won’t be able to greet a thousand people. She will be posing for pictures. We just don’t know her limitations on that. As much as she would want to…she loves the public but can she do it.” There will also be an auction of memorabilia from both Wayne and O’Hara in addition to the dinner to benefit the museum.