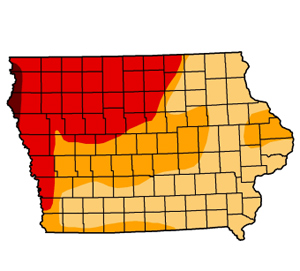 State drought map with the darker colors indicating the most severe drought areas.

Rather than hiring one state official to focus on water usage issues, Iowa Department of Natural Resources director Chuck Gipp says it makes more sense to have people from a variety of state agencies involved.

“We’re not here to scare anybody about what the water usage available is, but we want to caution people that we are still in the middle of a drought and we have stream segments that are way below normal flow,” Gipp says.

“In fact, if you look up at Ames to see the Skunk River, you won’t see a Skunk River.”

The state climatologist, the state geologist and a handful of other state officials are part of the “Hydrology Work Group.”

Current state law already lays out the protocol for which water users should be cut off first if the water supply dips.

“It says that out-of-state water users get it cut off first. Then it’s lesser priority things like crops and then organic crops and then it’s livestock,” Gipp says. “And, obviously, the last entity that gets cut off of the use of water is people.”

Gipp’s agency — the Department of Natural Resources — has the authority to order “lower echelon users” to give up their water supply if it’s coming from a river with a water level that’s dangerously low.

According to the U.S. Drought Monitor, much of the northwest third of Iowa is suffering through “extreme” drought. “Severe”drought conditions are reported in 58 percent of the state. A federal report issued last week concluded 60 percent of the entire country is in a drought, including the entire state of Iowa.