You are here: Home / News / Wicked winter weather on the way for Wednesday 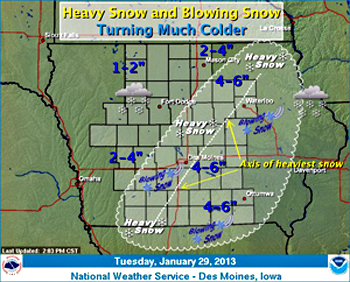 A major blast of winter weather is making its way into Iowa. National Weather Service Meteorologist Rod Donovan says rain will be changing over to heavy snow across central and southeast Iowa later tonight and early tomorrow.

“Snowfall amounts look to be greatest across portions of southeast Iowa – from Lamoni, up through Cedar Rapids and towards Dubuque – where we could see anywhere from 4 to 7 inches of snow,” Donovan said.

“In northwest Iowa, they could see little if any snow up there.”

About half of the state is under a Winter Storm Warning. Cities in the warning area include: Lamoni, Ottumwa, Des Moines, Ames, Marshalltown, Waterloo, Charles City and Decorah. The snow overnight will be accompanied by strong winds.

“Winds are looking to be significant, northwest at 25 to 35 miles per hour with higher gusts, and that’s certainly going to cause some blowing snow issues in the morning,” Donovan said. “We could certainly have blizzard conditions, especially in those areas that get three inches or more.”

The snow should be ending by mid-morning tomorrow. Temperatures are expected to fall throughout the day Wednesday and dip below zero across much of the state by Thursday morning.

Des Moines city officials held a press conference today and warned the coming storm will be similar to the blizzard which disrupted travel and downed trees and power lines in December.