You are here: Home / Agriculture / Governor pardons pig as part of celebration of bacon 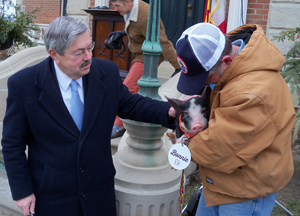 Governor Branstad pets Bonnie the pig after issuing her a pardon.

Governor Terry Branstad jumped on the bacon bandwagon Friday by pardoning a pig as part of the events surrounding the bacon festival being held at the state fairgrounds.

“To the best of my knowledge, this is the first pig pardoning we’ve ever had,” Branstad said. “We’ve had many a turkey pardoning in the back yard.”

Branstad’s granddaughters petted Bonnie the pig as he talked about Iowa’s role as the leading pork producer, and the state’s love of bacon.

“While Iowans enjoy different types of pork to eat, bacon is the most popular, and the easiest meat to prepare,” Branstad said. Bonnie added all the proper sound effects as the governor read about her fate. 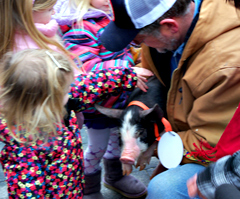 “Whereas Bonnie the pig is with us and was selected as the mascot of this year’s Blue Ribbon Bacon Festival,” Branstad paused and acknowledged Bonnie as she let out a squeal.

“Now therefore I, Terry E. Branstad Governor of the State of Iowa, do herby proudly proclaim Bonnie the pig free from the sizzle of the frying pan for this year’s Blue Ribbon Bacon Festival.”

Branstad then stepped down from the steps of Terrace Hill and petted the pig for photographers.

“There’s nothing like a happy pig,” Branstad said as Bonnie sat quietly.

Hilleman told reporters Bonnie’s time in the spotlight was pretty unscientific, as she was the first pig he was able to catch and get into his truck for the trip to Des Moines.

The bacon festival has become a popular event, with tickets selling out this year in a little over three minutes.