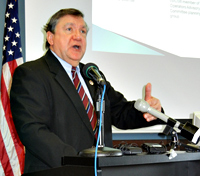 Public safety officials from around the state are learning more about the high-tech future of responding to fires, traffic crashes and other emergencies.

A Nationwide Public Safety Broadband Network (NPSBN), authorized by Congress a year ago, is now under development. Demonstrations of how the infrastructure could be used are taking place this month at the Iowa Department of Public Safety headquarters in Des Moines.

Jim Bogner is the Iowa Statewide Interoperability Coordinator. “It’s not a matter if this is ever going to happen…absolutely it’s going to happen,” Bogner told a group gathered for a demonstration today.

“There’s $7 billion to fund this nationally and Iowa will get a portion of that, so we’re actively working on this already to make it a reality.” Today’s simulation involved a car crash in a blizzard with two victims suffering injuries.

Officials demonstrated how paramedics will use devices to send patient photos and vitals wirelessly to a hospital so medical staff can prepare a treatment plan long before the patient is transported. The broadband network dedicated to public safety will also allow live video to be fed from a patrol car to a dispatch center.

“The officer has to do a lot of things. He has to get out of the car. He could be at gunpoint with that subject or wrestling with the subject to secure an arrest where he couldn’t use his radio,” Lampe explained.

“The dispatcher knows he’s out on that stop, so instead of trying to get a hold of him by the radio, now (he or she) has another tool to actually see live what’s going on. Why hasn’t he responded to me? What’s going on in that car?”